“The NFT market is expected to reach $1.3 billion by the end of 2021, with over 5.3 million sales to date. Here’s how to buy, sell and create these assets.

“NFTs have become one of the hottest crypto trends of 2021, with overall sales up 55% already since 2020, from $250 million to $389 million. Here’s how you can create, purchase and sell these popular digitals assets.

Non-fungible tokens (NFTs), which are unique collectible crypto assets, have been around as early as 2012 when the concept of Bitcoin Colored Coins first emerged. These coins were simply satoshis – small fractions of a bitcoin– marked, or “colored in” with distinct information that could link the coins to real-world assets, such as “this satoshi represents $500 of John Doe’s New York office building.” For the most part, however, Colored Coins were used to create and trade artwork like “Rare Pepe” digital cards on Counterparty, a peer-to-peer trading platform built on top of Bitcoin’s blockchain.

These cartoon frog images adapted from a viral internet meme were some of the earliest examples of unique digital artwork tied to crypto tokens. This paved the way for the ideation and creation of new non-fungible token standards – a set of blockchain building blocks that allow developers to create their own NFTs.”

How to create NFTs

Creating your own NFT artwork, whether it be a GIF or an image, is a relatively straightforward process and doesn’t require extensive knowledge of the crypto industry. NFT artwork can also be used to create collectibles like sets of digital cards.

Before you start, you will need to decide on which blockchain you want to issue your NFTs. Ethereum is currently the leading blockchain service for NFT issuance. However, there is a range of other blockchains that are becoming increasingly popular, including:

nce you have these, there are a number of NFT-centric platforms that allow you to connect your wallet and upload your chosen image or file that you want to turn into an NFT.

The main Ethereum NFT marketplaces include:

Makersplace also allows you to create your own NFTs but you have to register to become a listed artist on the platform beforehand.

OpenSea, Rarible and Mintable all have a “create” button in the top right corner.” Coindesk

“earn more about the powerful Paratoken Standard that will enable cross-chain NFTs in Episode 2 of our Ecosystem Update video series.

What is a token standard?

Our Co-founder & CTO Witek Radomski is the force behind the ERC-1155 token standard, having created it back in 2018.

ERC-1155 is a token standard for Ethereum. So… what does that mean?

Let’s say you want to create something on Ethereum, whether a new cryptocurrency or an NFT. You’d probably want apps, wallets, and smart contracts to recognize your tokens, right?

That’s what token standards are for; they’re basically a set of rules for creating smart contracts that power cryptocurrencies and NFTs, so that they can be used in as many wallets, marketplaces, and other apps as possible.

Cryptocurrency tokens built on Ethereum (like Enjin Coin) follow the ERC-20 standard. On the other hand, NFTs use the ERC-721 and ERC-1155 standards. While ERC-721 is a legacy standard made for one-off NFTs, ERC-1155 takes things a lot further.

For example, with ERC-1155, you can group NFTs and fungible tokens in the same contract, creating different types of tokens and adding functionality around them.

Some of the cool features of ERC-1155 are not only cheaper transactions (saving up to 90% on gas fees when minting!), but any block explorer gets a ton of info about what exactly happened with your tokens, whether they were minted, burned, or anything else.”Enjin.io

he In-World Builder is a collaborative tool designed to allow LAND owners (or anybody with operator permissions for someone else’s LAND) to decorate and manage their scenes directly in the world all in real time.

To be able to create and view your scenes as you build heralds a revolutionary new phase in the creation experience of Decentraland.

“The Builder Panel is your creation hub, allowing you to start creating scenes or editing those deployed on your LAND. To get started, navigate to some of your LAND (or any LAND that you are permitted to deploy content to) and click the block button in the bottom right hand corner of the in-world screen. It’s important to note that only scenes created with the current Builder will be editable, not those created with the SDK (for now).”

“Horizon Blockchain Games is — as the name implies — a company building games on the blockchain, along with tools to help others do the same.

The company announced today that it has raised another $4.5 million, bringing its total raised to a little over $13 million.

Horizon’s first game is Skyweaver, a competitive digital trading card game that taps the blockchain to give players more realistic ownership of their virtual cards. Once earned through competition with other players, cards can be sold, traded or taken out of the system and put in storage.

As I previously wrote about Horizon here:

Horizon is working down two paths in parallel here: On one path, they’re building an Ethereum-powered platform called Arcadeum for handling in-game items — establishing who owns any specific instance of an item, and allowing that item to be verifiably traded, sold or given from player to player. Once an item is in a player’s possession, it’s theirs to use, trade or sell as they please; Horizon can’t just take it away. In time, they’ll open up this platform for other developers to build upon.

On the other path, the company is building out its own game — a digital trading card game called SkyWeaver — meant to thrive in its own right while simultaneously showcasing the platform.

“Arcadeum” mentioned above has now been rebranded as “Sequence,” an easy-to-integrate wallet system that aims to hand-wave away the complexities of the blockchain. They want to let users buy and store their digital goods on the blockchain without either the user or an app’s developer really having to think about the blockchain. Horizon co-founder Michael Sanders tells me the rebranding comes with an overall broadening of its focus; the “Arcade” in “Arcadeum” suggested it was all about gaming, whereas the aim is to help manage all kinds of digital items, from virtual gaming goods to NFT art and beyond.

The Horizon team often mentions being built to support “Web3,” a term I’ve been hearing more and more lately. In short (or, at least, as best I understand it), Web3 is a category of online-but-decentralized apps, services and games built around the blockchain (Ethereum, in this case) to give individual users more control of their data. The Ethereum foundation has a breakdown of the concept here. 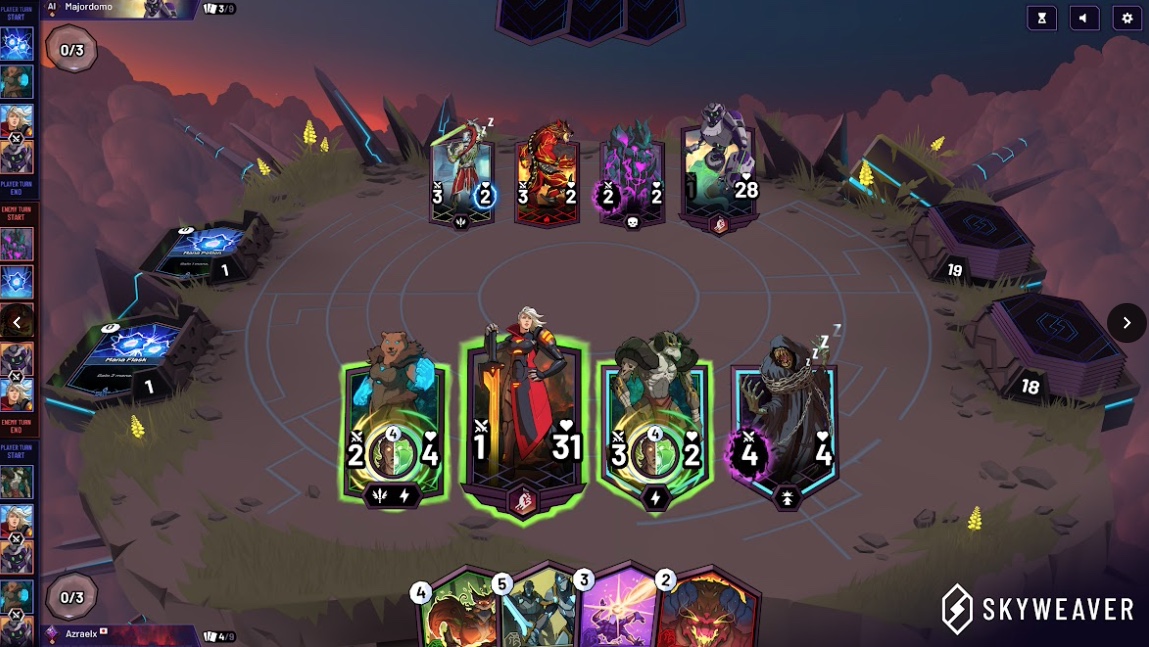 Horizon originally intended to open Skyweaver up more broadly in 2020; as of this morning it’s still in private beta, with plans to open widely later this year. Sanders tells me they’ve let in over 66,000 players so far.

The company says that investors in this round (a “pre-Series A round SAFE”) include CMT Digital, The Xchange Company, BITKRAFT Ventures, Khaled Verjee and Zyshan Kaba.” TechCrunch

The information contained herein is for informational purposes only. Nothing herein shall be construed to be financial legal or tax advice. The content of this website is solely the opinions of the speaker who is not a licensed financial advisor or registered investment advisor. Trading cryptocurrencies poses considerable risk of loss. The content on the blog does not guarantee any particular outcome